Puerile humor has a place in spiritual life.

Self-deprecation can be a healing and healthy experience when handled with intelligence and warmth. Seth Rogen  (writer) and Judd Aptow  (producer) demonstrate this in their passage of age, teen film , Superbad. 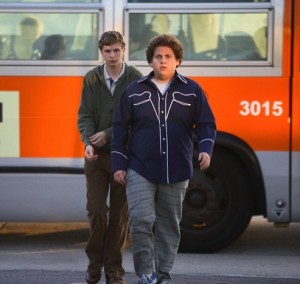 Set in an anytime-any-town world, Superbad holds the warping mirror of funhouse ribaldry to the pressure of male teenage angst. The large part of this angst flows from a young man’s longing for belonging, and a burgeoning desire for warmth and intimacy. Combine the unlikely fulfillment of those intensifying desires with an increase in testosterone as their male organs fill with an escalating sense of importance and you have the underpinning of teenage angst.

In the absence of anything like a spiritual context (or even a civilized approach for that matter) to understand the changing, raging emotions of puberty,   kids are mostly left on their own. Consequently, they opt for a variety of outlets; most of which have to do with self-medication (drugs, alcohol, gaming, etc…) On the extremes of the bell curve some mange to bury themselves in their studies and a handful on the other end turn to more violent behavior. (Class and culture certainly play a role.)

This movie is about those on the bulge of the bell curve.  It reminds us (the men in the audience) of our own childhood grapplings with the pressing concerns of, not sex, but of a need to be needed. Sex obsession maybe the storefront, but fraternity, self-respect, and the need to feel complete is the factory.

From a spiritual point of view, life is meant to be a journey of self-discovery. The soul longs to awaken and return to it fully realized stature. The soul longs for community, love, and the fulfillment that can only come in the joy of relationship. The soul, unfortunately, is destined to find none of these in a world made of transient, and fleeting moments that hint at a joy we sense is there but never really arrives. The teen age years wake us up to this Sisyphean  reality

If we are fortunate, the longing to understand is coupled with a supportive environment, or ideally with some manifestation of the guru principle (in a friend, a mentor, the right book…)  Seth Rogen’s script shows that in friendship such support is possible. It reminds us of the importance of self-honesty and the need for vulnerability to achieve understanding. Although for the two heroes of the film (played brilliantly by Jonah Hill and Michael Cera) their epiphany comes with the help of an alcohol-based stupor, the result of a day and night of hilarious teenage yearning and scheming.

Superbad is one of the funniest, end of the school year-get the booze to impress the girls-metaphorical journeys depicting the complexities of young human relations ever directed for film (Greg Mottola.) My only complaint is that either the writers are late bloomers or there is an unspoken agreement among Hollywood filmmakers to deny the age truth. For most of us the teen struggles and unbridled sex talk are experienced between the ages of 12 -15. By the time we were all seniors we had (most of us) decidedly more mature points of view.

Nonetheless, it’s good to laugh at ourselves. Every generation needs their passage of right metaphor: from American Graffiti through Breakfast club to American Pie. Superbad without dating itself steps up as this generation’s seminal entry into American teenage romance comedy. Laugh and let the healing begin.

An organizational psychologist and intellectual visionary, Atma is a provocative, colorful personality whose commentary on the subjects of wellness ranges from opening yourself to compassion and empathy to the absolute need for personal discipline and courage. As a leadership mentor his methodology derives from his study in India of the ancient Vedic teachings to post-modern, high-tech, street level savvy. Atma brings a unique and cutting perspective to the little-understood world of marketing psychology.
View all posts by Atma »

Posted on September 2, 2007, in Films, Liked it. Bookmark the permalink. Leave a comment.