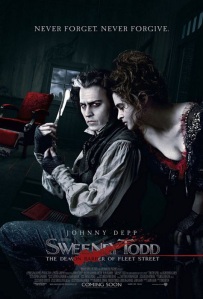 Is there a spiritual lesson in the hauntingly beautiful, Tim Burton adaptation of Sweeney Todd? Resoundingly, yes.

Sweeney Todd, played with alarming depth by Johnny Depp, is the personification of all desires unfulfilled. He is the reservoir of what is known in Sanskrit as krodha or anger, frustration, rage… The movie is an artful metaphor for the consequences of anger. Anger is the poison that will destroy its bearer. It does not, however, contain its destructive tendencies to the source alone. Anger, after tearing out ones innards it usually brings down much that is dear to the afflicted.

Consider this sequence of verses from the Bhagavad Gita, “While contemplating the objects of the senses, a person develops attachment for them, and from such attachment lust develops, and from lust anger arises. From anger, complete delusion arises, and from delusion bewilderment of memory. When memory is bewildered, intelligence is lost, [bhuddhi nasat] and when intelligence is lost one falls down again into the material pool. (2:62-63)

The downward spiral ends in the loss of bhuddi nashat meaning, spiritual intelligence. So the instruction seems clear and obvious. But, how does this loss of spiritiual consequence look? What will it feel like?

Important questions that deserve to answered; and if something is worth doing it is worth doing right. If you are going to answer a question publicly it is in everybody’s interest to answer it the most beautiful and intelligent way possible. Using the “best words (and the best images) in the best order, as Mr. S. Coleridge might say about film, if he were around today.

Mr. Burton demonstrates that if a question is worth answering (or if a story is worth telling) it is worth doing beautifully,

The loss of conscience or spiritual intelligence is depicted with beauty, intelligence, depth and a delightfully perverse sensed of humor.

As for the musicality of it, while I am not personally the biggest fan of Stephen Sondheim, his work was deftly handled by the talented ensemble. The musical form, especially in film, might be the hardest of all form to pull off. I can think of very few examples of the musicals well done. The standard is, and continues to be, the Brecht-Weil, Three Penny Opera. Mr. Burton’s Sweeney Todd is not quite to that level, but it is certainly competing within that class.

Posted in Films, Liked it