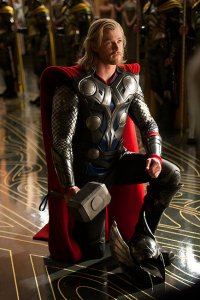 What should have been a really cool chapter in the Marvel comix/movie build up to the Avengers was a dreary exercise best described as a perfunctory pronouncement. It was less of a movie and more of an extended trailer.

Filmed and directed with great flourish, a powerful sound track, and beautiful actors, who were all sitting around waiting for a cohesive story to come along and give some meaning to their existence. Alas it did not.  To make matters worse, of all the interesting enemies that Thor has battled over the last 50 years the frost giants might have been the least interesting and least plausible. This is because according to the Vedic theory of film criticism, mythological personalities have resonance with humans because at some level our sub-conscious recognizes that these are not made up ideas but rather reflections of something that actually exists in dimensions now sealed off to us.

We may not have an abundance of evidence for the existence of mythological beings, but we do have enough to consider it as a hypothesis. It can hardly be a coincidence that all cultural cosmologies share an amazing number of attributes among their descriptions of mythological beings. It is a bit too facile and poor scholarship to simply relegate this phenomenon off to shared subconscious archetypes.  As open-eyed scientific observers we should consider the possibility that other life form yet undiscovered by everyday science may exist. According to the Vedic model demigods, fairies, ogres, angels, demons and all manner of extra-human being are real.

But frost giants do not have a place in the pantheon of potentially real persona. They are a dumb concoction of the marvel writing team of Stan Lee and his brother. The Norse mythology does describe the jotunn or giant and demon races, similar to descriptions in Vedic texts. But frost giants were simple a very weak substitution.  Though these were some of the first villains described in the original comic, the film makers took so many liberties with the origins story they could easily have made the frost giant into real giants with more reasonable powers.

The story would also have been better if it had clung to the aspect of the original story that made it such a valuable comic in the silver age of the 60’s (I remember finding a forgotten trunk in a storage shed in the early ‘70’s, filled with many of the original Thor comics and loving every minute of reading their musty smelling pages.) In the original story Odin banishes Thor to earth where he becomes Donald Blake medical student and lives as an ordinary mortal. Eventually he reconnects with his hammer and for a time lives with a dual identity. The film makers decided to jettison all this in favor of a parade of special effects and muscle flexing. The result is a film that is all form and little content.

Recommendation: if you are, like me, a fan of the Marvel Comic world and you are counting the days to the release of the Avengers movie, you pretty much have to see it. Everyone else, stay home and watch something else. 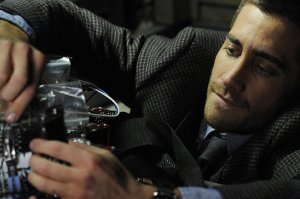 Source Code was a film filled with potential. It had an intriguing theme, that when we die enough of our mental energy persists in the three-dimensional realm that if you could capture it or contain it you could mine it to explore the experiences and sensory input of those last moments (eight minutes according to the filmmakers). But sadly the filmmakers took that potentially interesting concept and rammed it into a bad Hollywood action romance. A world where our hero is repeatedly experiencing eight minutes of somebody’s last moments alive before being blown to bits by an anti-government atheist. A sort of Ground Hog’s day that descends into hyper incredulousness because in this person’s eight minute memory the internet works, you  can call people the memory keeper didn’t know (like the hero’s father) and you can go places that they never went; even get off the train and run around a train station that clearly wasn’t  in memory. But let’s say we give them all that. Let’s be a bit flexible and give these befuddled writers some leeway. Unfortunately they will return the favor by resorting to one of the weakest and worst cinematic devices known to filmkind: time travel.

The reason time travel is such a crummy ploy, at least according to a Vedic theory, is that traveling back in time is impossible. According to both physics and Vedic rules time is one directional. And nothing can reverse events transpired in the past. In the Vedic view time is an incarnation of God known as Kala. Hence the famous verse, “Time I am, the great destroyer of worlds.”

It has always felt to me as though the plethora of time travel themed movies share an almost pathological evidence of God Envy. It is the bitter longing of the religious atheist to fantasize about the ability to bend or reverse time. It is even understandable. But as a plot device it remains a creative intransigence. A time travel plot is that most immoral act of writing: it lacks imagination.

Recommendation: not worth the price of a movie ticket at the theaters and not worth the time of an intelligent working person on DVD or Netflix.

Posted in Films, Hated it 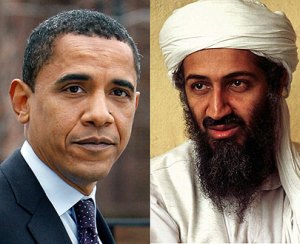 1)      Barack Obama is not the pathetic and intellectually incurious enabler of criminal doctrine that his predecessor G.W. Bush was. And he is certainly not the dark and Machiavellian spook that Bush senior was.  Cleary Obama is more affable and intellectually competent than GW.

Consequently, I prefer him over Bush the way I prefer a cautious panther to a rabid hyena. In other words, I find Obama potentially dangerous, albeit more reserved. After all in voting record and substantive policy practices Obama is not widely different from his predecessors. And he is arguably not bucking the status quo and putting us on a more humane and compassionate path.

2)      Neither this article nor any of my convictions have a disparaging attitude against soldiers who risk their lives to protect the lives of the innocent. It has always been my hope to use my research and work in industrial psychology and stress management to support and improve the way in which the warrior class is trained up. A class I believe will always be needed even in the best of times. But there are rules to war  and the way we abide by them defines us as people.

That said I can make the unpopular suggestion that the raid against Osama Bin Laden is nothing to cheer about. Yes, he was a bad man. Yes he deserved to be punished for exploiting religion to justify violence and murder. But there is a reason why we don’t approve of other governments illegally assassinating unpopular personalities. It is because contrary to the hormonally stimulating depictions in many Hollywood films, we as Americans (at least an overwhelming majority of us) do NOT believe in the doctrine that might makes right.  We want to be the land of the free, not the home of the Stasi or the KGB.

Each time we surrender to the emotionally appealing but ethically destructive lure of the ‘might makes right’ mentality, we take a step on to a slippery slope that ends in the destruction of the humane and uplifting fabric that if not in practice at least in principle has always been our defining value as country.

The concept that might makes right is central to any totalitarian regime and anathema to the land of they who would be free. It is the foundation of all racist movements and almost always leads to oppression and then genocide.

What makes us strong and free is our ability to be just and fair by resisting the emotionally easy displays of violence as a means to solve our problems. Destroying your enemies is understandable.  Destroying your enemies without becoming them is venerable.   This is why we win when we put off revenge for justice, and overcome rage with wisdom.

Remember we were the country that put off Stalin’s show trials and Churchill’s summary executions and brought the perpetrators of the Nazi regime to stand relatively bona fide trial in the city of Nuremberg. We set an important standard in that era, we were not afraid to be better than our enemies.

When we rally around the simplistic devices of a Hollywood action film as a means for assuaging our political fears we do not become stronger, braver or freer. Instead we are diminished; reduced to cowering animals that lash out at what they fear. Courage requires compassion or else it becomes just a subterfuge for despotism. This is why assassinating Osama was wrong and capturing him would have been the far more American thing to do.

As a people we should remember that (at least) philosophically we have always championed the opposite of might makes right. We are Americans and we have a duty to be the best example of all the important virtues; courage, kindness, and wisdom.

As Abe Lincoln said, “Let us have faith that right makes might, and in that faith, let us, to the end, dare to do our duty as we understand it”